Gianna Nicole is a bratty teen slut whose parents have been trying to get her to apply herself to something for ages. But it seems like no matter what they suggest, the only things Gianna is interested in are partying with her friends, shopping, and hooking up. Their latest idea is to hire Johnny Sins, a private tutor that the other ladies on the block just can't stop raving about, to help Gianna learn piano. As soon as Johnny gets there, it's plain to see that Gianna has no interest whatsoever in learning to play, so Mr. Sins has to bust out his secret weapon: his huge cock! Gianna takes one look at that fat dick and snaps to attention, stroking, sucking, and fucking it while her gorgeous natural teen titties bounce. One big facial cumshot later, and Johnny has earned himself a new star pupil! 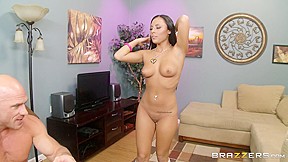