This one is for all you gamers stuck on the new addition of that augmented reality mobile game. We bring you the latest and greatest Reality Kings parody of Pokemon. Annika Eve appeared out of nowhere and taunted Xander. He later woke up and realized he was missing out on some legendary pikapuss. He went far and wide to get deep and wet. He finally caught up to one of the greatest pokeasses on the planet. She put up a great battle as she shook her ass to deflect some of Xander's balls, but he would prevail. Once he became her trainer, school was in session. He used the blow job command right away, and she started going balls deep. He eventually took the game inside where it is safest to play. That's when it go real hardcore. This little pikapuss had a body on her and Xander was in gamers heaven. He tossed his ball all over her. He bounced them off her ass and she rubbed them all over her face. This game came to it's final level as Xander's pokeballs exploded all over the place. 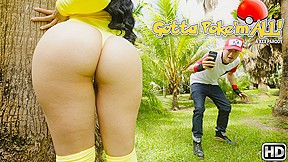