Phoenix was trying to get in a little RnR by cooling down and meditating after a pretty thorough workout. As she was doing her breathing exercises she was startled by her stepson Conor shredding on his guitar in the garage. She did her best to tune him out and focus on her meditation but she couldn't seem to do it. She stormed into the garage and demanded he stopped immediately. Conor was more than willing to oblige but she was so pissed off she made him go to his room. As he was walking she stopped him in the middle of the living room to really read him the riot act and, by chance, unintentionally touched his dick. She noticed he was hard and realized that he loved being scolded by her. She whipped out his dick and really started sucking his dick. From now on, it can only go one of two ways. Either Conor is going to make sure he gets in trouble more often now or he's going to be too ashamed and avoid getting in trouble ever again. 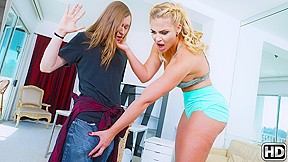