Reagan Foxx is one hot step-mom. Her step-son, Juan, loves to sneak around and spy on her, specially when she's in the shower. This time around, he snuck in and started taking pictures of her with her own phone. He couldn't contain himself so he had to jerk off at the same time. Reagan caught him red handed. She decided to teach him a lesson and had him eat her pussy. After that, it was time to teach him a thing or two. She choked on his cock and then shoved his dick in her pussy. Juan pounded his step-mom all over the bathroom in several different positions before busting a load all over her tits. 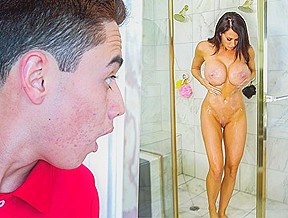