October 12th 10:01am - Case #5879624 - Theft (Repeat Offender) - Suspect is a known thief. She has been caught numerous times around the mall. Staff was aware of her look and spotted her as soon as she walked in. Staff alerted LP officer via silent alarm. She was apprehended shortly after and taken to the LP office. Officer conducted a strip search and recovered a cache of merchandise. Suspect was held on site until law enforcement arrived. Evidence logged on Oct 12, 2016. 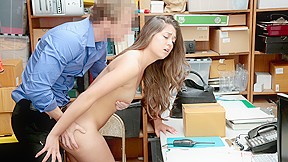