Whitney Wright is trying to get her college roommate, Johnny SIns, to fuck her but he doesn't want any part of it since he has a girlfriend. She's frustrated by his loyalty to a long distance relationship and Whitney will do anything to have him fuck her dripping wet pussy. While Johnny's on the phone with his girlfriend, Whitney overhears him mentioning how much he misses her--and pounding her pussy! The girlfriend lets Johnny know that she is sending him a special package to help him out for when he's really missing her and she's not around! Johnny gets a package at the door and brings it into his bedroom and starts setting up his new fuck toy. He puts a picture of his girlfriend right above the sex toy. Right before he starts using it, sneaky Whitney switches places with the toy! This horny slut has another surprise in store for her roommate, since there's nothing like fucking the real thing! Let's hope Johnny's girlfriend doesn't find out that he's got a new fuck toy to enjoy--and her name is Whitney Wright! 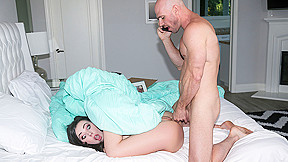